“Pretty much thought of a pretty neat idea I hadn’t seen done before with a VM, and I wanted to turn it into reality! Your job is to escalate to root, and find the flag. Since I’ve gotten a few PM’s, remember: There is a difference between "Port Unreachable” and “Host Unreachable”. DHCP is not broken ;) Gotta give a huge shoutout to c0ne for helping to creating the binary challenge, and rasta_mouse and recrudesce for testing :) Also, gotta thank barrebas who was able to find a way to make things easier… but of course that is fixed with this update! ;)“ – zer0w1re

In order to understand what Port Knocking is and how it works, I found the following 2 links: link_1, link_2.

Basically, I need to send SYN request to several random ports (3 in this case) in correct orders and valid time period, then the firewall or proxy will change the rules to open hidden ports.

Due to there are 3 ports and total 6 possible orders for the sequence, I wrote a script to try all the possibilities. 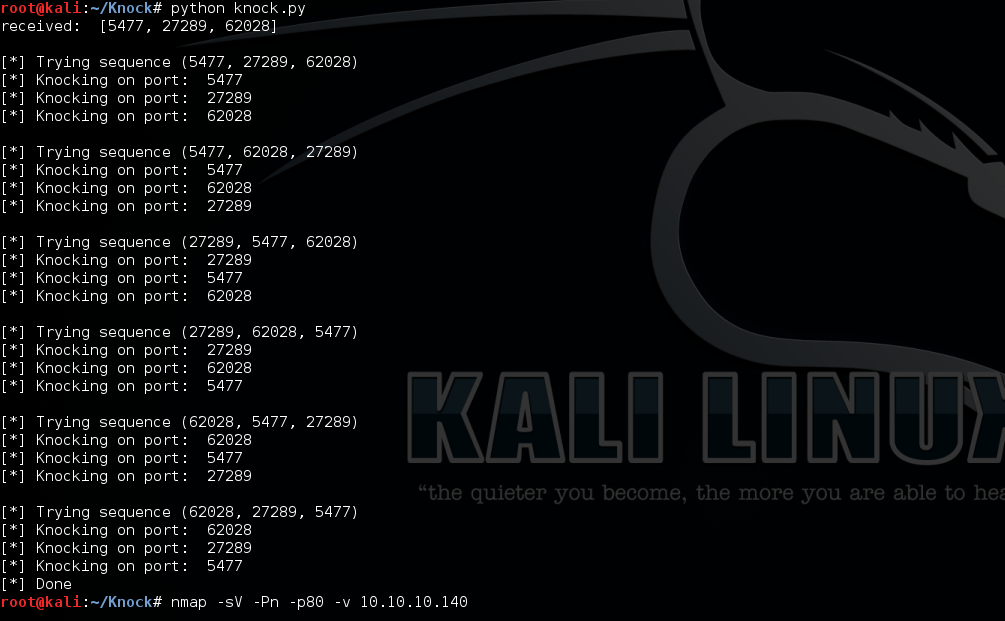 After run the script, use nmap to check open services.

Next I run nikto scan on port 80 and Dirbuster to guess hidden paths as standard procedure but nothing found, only the knock knock picture. So I downloaded the picture and use command strings to check if there is anything hidden in the the picture.

After tried several different encryption methods, I found this is encrypted by Caesar cipher with ROT-13. There is an useful online Caesarian cipher decryption tool which allow me to decrypt cipher text in different ROT number to detect the correct ROT number.

They are actually backwards, so the Login Credential is

Now I can SSH login to the target (I tried ‘Jason’ first but failed, when I tried all lower case ‘jason’, it works)

Due to the current shell is Restricted, I use python python -c "import pty; pty.spawn('/bin/bash')" to escape.

By poking around, I found a binary program ‘tfc’ with SUID bit set which normally can help us to get ROOT.

As we can see above, reverse the input file and output file, it will decrypt the cipher text.

Now let’s try a large file to see if it has Buffer Overflow vulnerability.

Segmentation fault!! sounds like it has BoF. Then I use searchsec.sh to check what protections are enabled on it.

Cool, there is no any protection at all!

Due to gdb is not installed on the target machine, I have to download the tfc program to my Kali for further analyzing.

Why here is 0x0675c916 but not expected 0x41414141? After playing around and further analysis, this should be encrypted of 0x41414141. So I need the payload encrypted first. Thanks to knapsy. He provided a method to get encrypted data from core dump file. This method will save lots of time and works to reverse engineering the tfc program for re-writing the encryption script.

Due to 4 ‘A’s always starts with same bytes 'def0 5bab’ in encrypted file, So ‘def0 5bab’ can be used as a pattern to locate encrypted data in core dump file.

Next, use msfelfscan to get jmp esp address.

Then use msf with payload (linux/x86/exec) to generate shellcode

-b switch will blacklist special characters.

Then I wrote a python script to output payload with shellcode.

Next, use tfc program to encrypt the payload and dump the encrypted data from core dump

Cool, it works on my Kali!

Now, upload exp.tfc to target machine and exploit tfc to get ROOT!