“The next machine in the Tr0ll series of VMs. This one is a step up in difficulty from the original Tr0ll but the time required to solve is approximately the same, and make no mistake, trolls are still present! :) Difficulty is beginner++ to intermediate.” – Maleus 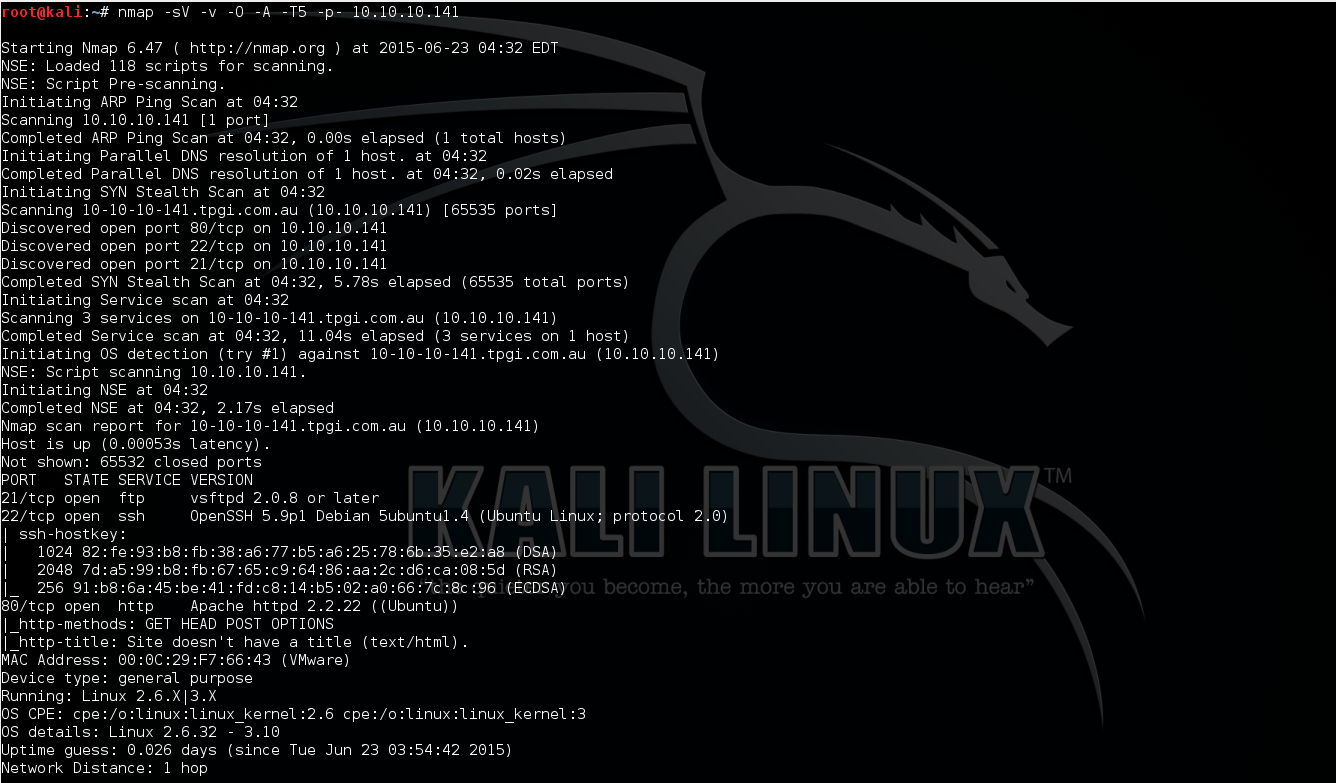 Next, I run nikto scan on port 80 to check if there is any web vulnerability.

Nothing too exciting, but noticed that robots.txt found without disallow which is odd. As a result, I open iceweasel browser to have a close look at robots.txt.

Here I wrote a python script to check all of the directories in robots.txt and filter out working directories then saved in a file.

Four directories gave 200 code response. Then I use wget with -i switch to download pictures from each directory.

Next I use strings to check each downloaded picture to find hidden information.

y0ur_self looks like another hidden directory on the server.

Found answer.txt file which the content looks like encoded by base64. Then I decoded and save to file answer2.txt.

This file is more like a dictionary file and will be useful later.

I firstly tried anonymous user to login but failed. After checking the MOTD message and used Tr0ll / Tr0ll as login credential, I logged in successfully.

Here I found a zip file. After I downloaded it and trying to unzip the lmao.zip, it was asking for password…

Next I try to crack the zip password with the dictionary file found before.

fcrackzip will found the password in seconds! Now I get in the lmao directory and found noob’s SSH key file.

Firstly, I tried to SSH login with noob’s key file directly but failed. It looks like there is something command run forced.

By searching in google, I found shellshock bug will help to bypass this and make commands execute. For more details about how to exploit SSH via exploiting shellshock vulnerability, please check: here and here

So I tried the following command and it works!

Now I have already broken into the shell.

By poking around in the file system, I found three ‘door’ files under /nothing_to_see_here/choose_wisely/. There is r00t file in each door folder and they will change every couple of minutes.

After several trial and error, I found the r00t file with biggest size is the target which is vulnerable to buffer overflow.

Great, nearly no protection. Now it’s time to move on to find and overflow the EIP.

Firstly, I use pattern_create.rb to generate 500 unique strings:

Then use gdb on target machine to track the value of EIP when overflow happened.

Then I use metasploit to generate a shellcode to run /bin/sh.

Next, construct the payload and exploit the r00t file to get ROOT on the target!

And then take the FLAG down!